La Sirena was founded by winemaker Heidi Peterson Barrett in 1994, and was born out of chance opportunity – a custom crush wine for a client that fell through.  The client had hired her to make Sangiovese during the 1994 vintage for a new brand, but ran into a conflict of interest situation with their family, who had other winery ties.  The wine was already made and quite delicious, but the client had to abandon the project.  They were going to put the wine on the bulk market and she thought, ‘Here’s my chance to start my own winery, maybe I could buy it!’ Once the decision was made, she needed to come up with a winery name, design a label and get approval and permits, within a 30 day time period. The wine was ready to bottle, so time was of the essence. 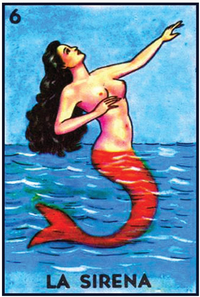 Heidi and her husband Bo found the name while looking through the playing cards of the Mexican card game called Loteria. All the cards are different nouns, and one was La Sirena- the mermaid. As avid scuba divers and ocean lovers, the name stuck out to them: here was a beautiful symbol of something magical, like wine, and a way for her to combine two great passions. Designer and friend Michele LeBlanc came up with a fun and fanciful mermaid label based on Heidi’s own likeness, and with that, La Sirena began in earnest in 1994 with 200 cases of Sangiovese. The flagship wine, La Sirena Cabernet Sauvignon, was first produced in 1996, and that vintage also brought a fresh, elegant new label, which is still in use today.

Today, La Sirena makes around 2,500 cases of 5-10 different wines each year. The current lineup includes Cabernet Sauvignon, Pirate TreasuRed, Moscato Azul, Malbec, Rosato, Chardonnay, and Studio Series, as well as sister brands Barrett & Barrett and Aviatrix. All the wines are small production lots made with great care and the highest quality in mind. Based in Heidi’s hometown of Calistoga, these wines are near and dear to her heart – literally. Heidi’s home vineyards provide much of the Cab and Syrah she uses in her wines, as well as one special acre of Muscat Canelli grapes to use in the now-iconic Moscato Azul. Heidi loves having her own brand because she gets to make whatever she wants – creating, experimenting, and being free to explore and play, while also giving her fans the delicious (and fun!) wines they have come to expect from her.